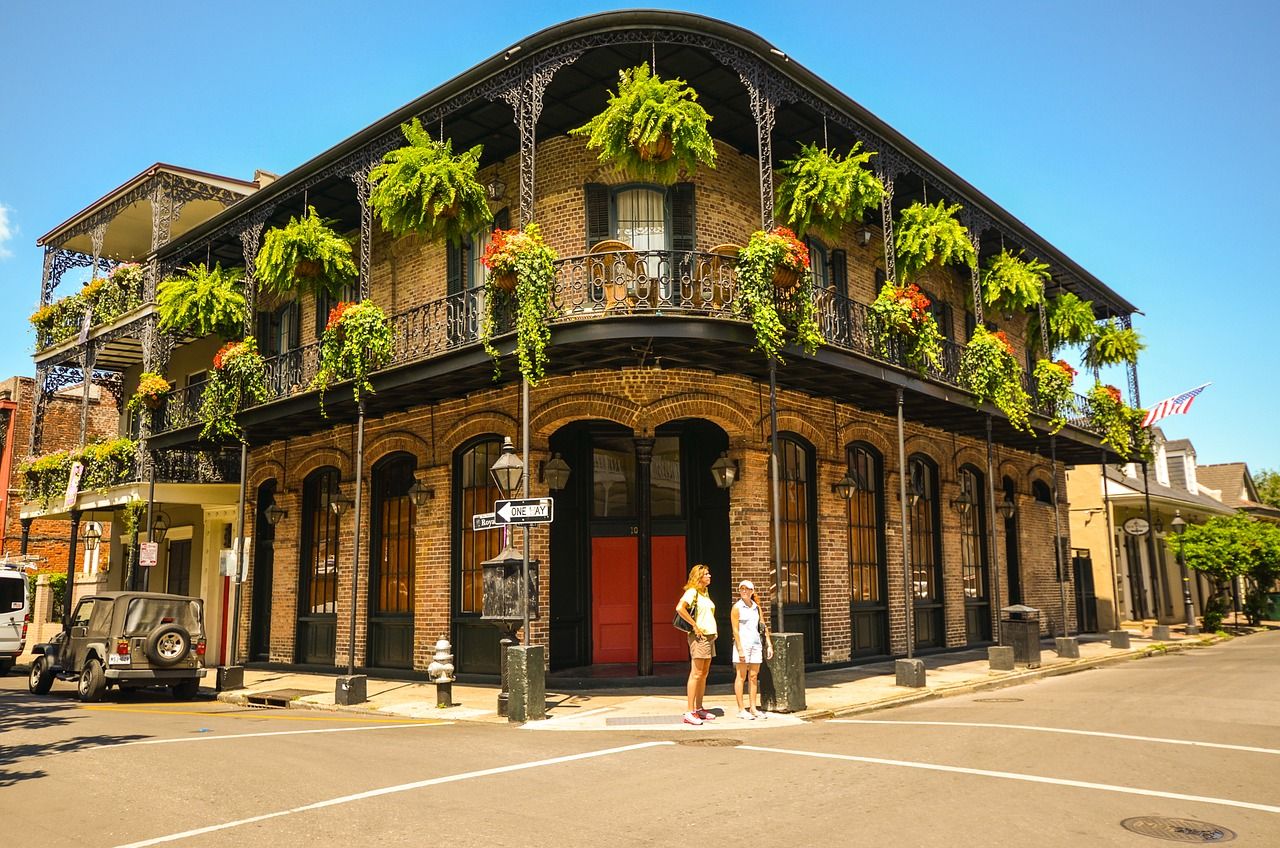 The 8 places you should only travel to in your 30s

There are a few things that happen by the time you hit 30. You’ve figured out the delicate balance between work and play. You appreciate the finer things but still have a youthful and bold spirit. There are some places that are just better to visit in your 30s when you are mature enough (and financially stable enough) to get the most out of the trip.

Here are a few places that are best to visit in your 30s.

Live music, good food, and a laid-back vibe make New Orleans a great place to visit, especially as the city celebrates its 300th anniversary in 2018. The party starts as soon as you walk out the door and lasts until whenever you decide to call it a night. It’s okay to walk down the street with your frozen Hand Grenade, which may explain why Bourbon Street always has a faint smell of vomit. Visiting in your 30’s, you know that Bourbon Street isn’t the only street or even the best street in the French Quarter. Frenchman Street is far less rowdy and a much better look if you prefer live music over DJs. Instead of walking up and down Bourbon Street, take your “go-cup” and just wander the side streets of the French Quarter. There are so many shops, restaurants and buildings with unique stories. New Orleans has a lot of good food options — you have to do Cafe du Monde at least once (it gets busy but is usually okay later in the evening). The Court of Two Sisters and Broussard’s are two upscale restaurants with interesting histories. If you are into celebrity chef’s, Emeril’s restaurant is close to the French Quarter, but it can be hard to get reservations.

By the time you reach 30, you should be mature enough to understand the importance of “What happens in Vegas…” but young enough to actually do some of the types of things that require such an oath, with or without class. A weekend in Las Vegas will put a dent in your pocket and possibly a hole in your liver. That being said, Vegas has endless entertainment and is a fun place to spend a weekend with friends. The Strip is the most popular part of the city, but it’s worth it to venture to some of the older (less touristy) casinos and bars off the strip as well.

The famous beer corner is perfect for those in your 30s. You are young enough to be excited about cheap street food and 25 cent beers… but wise enough to know that drinking a full $5 worth is a terrible idea. There are a lot of really good food options in the Old Quarter of Hanoi, so it can be hard to figure out which ones to prioritize. Go on a street food tour early in your visit — it’s inexpensive and will take you to really good mom and pop restaurants. The Hoa Lo Prison Museum and the Imperial Citadel are tourist destinations but worth the visit (just go during off-peak hours). Trang Ting Road is a good place to window shop and check out local art boutiques. It’s also a nice break from the chaos of the Old Quarter.

People may visit Miami for the beach, but they stay for the scene. Nikki Beach has an expensive but really good Sunday brunch. After brunch, walk down to the beach or walk up to Ocean Drive. People watching on Ocean Drive can easily consume hours of your day, but the 18% automatic service charge isn’t worth it. Stop by Wet Willies, the Clevelander, or one of the many outdoor patios just long enough do some people watching, then leave South Beach. Going to Miami in your 30s is great because you are willing to step out of the Ocean Drive bubble to see all of the other exciting areas of the city. The Epic Hotel downtown is a good look (they have daily Happy Hour as well as several restaurants, clubs and a rooftop deck); the Wynwood Art District also has really good restaurants and bars (without the automatic service charge).

Before you roll your eyes, consider this — Disneyland is opening a brewery in 2018! Going as a kid may be cool, but when you go in your 30s, you can spend your hard-earned money on those pricey Disney gifts, ride the Star Wars ride (that you are presumably tall enough to get on) as many times as you’d like, and eat your fill of turkey legs and corn on the cob. As a bonus, you’ll save HOURS not waiting in line to snap pictures of the college girl pretending to be Snow White.

There are over 21 million people living in Beijing, and everything seems a bit bigger and grander. The country has only been open to the Western world for a few decades, which from my experience, can make it difficult for people of color. Despite these challenges, Beijing is a great place to visit in your 30’s. You can afford the plane ticket to get there and have the maturity to handle the potential attention. You will be tempted to go to the Donhuaman Night Market for food, it’s great for the pictures and the experience. Hit up Bianyifang for Peking Duck, it’s one of the oldest in the city. The Badaling section of the Great Wall of China is only a few hours from Beijing and a nice escape from the smog in Beijing. A tour may be an efficient way to get there, but many of them have unnecessary stops/tourist traps at overpriced jade or silk factories. If you must take a tour to the wall, don’t buy anything at the stores you’re forced to visit — you can haggle a much better deal at a flea market.

Most of us know Bangkok by its shortened name, but it actually has the longest city name in the world: Krungthepmahanakhon Amonrattanakosin Mahinthara Yutthaya Mahadilok Phop Noppharat Ratchathani Burirom Udom Ratchaniwet Mahasathan Amonphiman Awatansathit Sakkathattiya Witsanukamprasit. Just like its local name, the city can be can be a little overwhelming. While it is teeming with backpackers, it’s better to go to Bangkok in your 30s when you are open to visiting areas outside of Khao San. Bangkok has an outstanding food scene. Cabbages and Condoms is a socially conscious restaurant and supports organizations promoting family planning and other social issues in an entertaining way. A few other suggestions for dinner, Mr Joe’s, Bann, 80/20bkk. The Grand Palace and Wat Pho are worth the visit, but the Golden Mount is less crowded and a relaxing break from the traffic. The short hike to the top of the Mount is a great place to take pictures of the city. If you’ve been in your 20s, go back with stretchy pants and with a more flexible budget.

Thirty year olds are young enough to appreciate the young tech vibe that San Francisco is known for, yet established enough to afford to visit. It’s crazy expensive. This is the city where we can actually tell you how much it costs to rent a cardboard box ($400 a month) or live in a van ($800 a month, plus mileage). So as you can imagine, going as a visitor can set you back a pretty penny. Despite the price tag, there are laid-back places where you can enjoy a reasonably priced night out. Casanova Lounge in the Mission District has a good happy hour with cheap drinks and eclectic art. Clarion Alley is also nearby where you can see cool graffiti and street art. For dinner, Brenda’s French Soul Food Cafe is a reasonably priced dinner option. The food served is exactly as you would imagine from the title and is worth the wait (they don’t take reservations). Wine country is only a couple of hours away. Peju winery has award-winning wines and beautiful courtyard with flower gardens and ponds. If you’ve got a bit more time, check out the Francis Ford Coppola winery in Sonoma County. It’s a bit farther, but they have enough going on to keep you entertained for the day. In addition to the wine tastings, there is an Italian restaurant on site, a small museum (with Coppola’s Oscars on display), and a pool.

While traveling internationally, I almost always choose to stay in a hostel, budget hotel, or bed and breakfast.  Those who frequently stay at hostels often refer to the

This short travel tech episode discusses apps that may be helpful during the holiday season:  Hipmonk and Roadtrippers.  Reyna Simone also discusses RFID protectors–there are some inexpensive ones

Instagram did not return a 200.
Copyright © 2018 Travel Blog. All Rights Reserved.