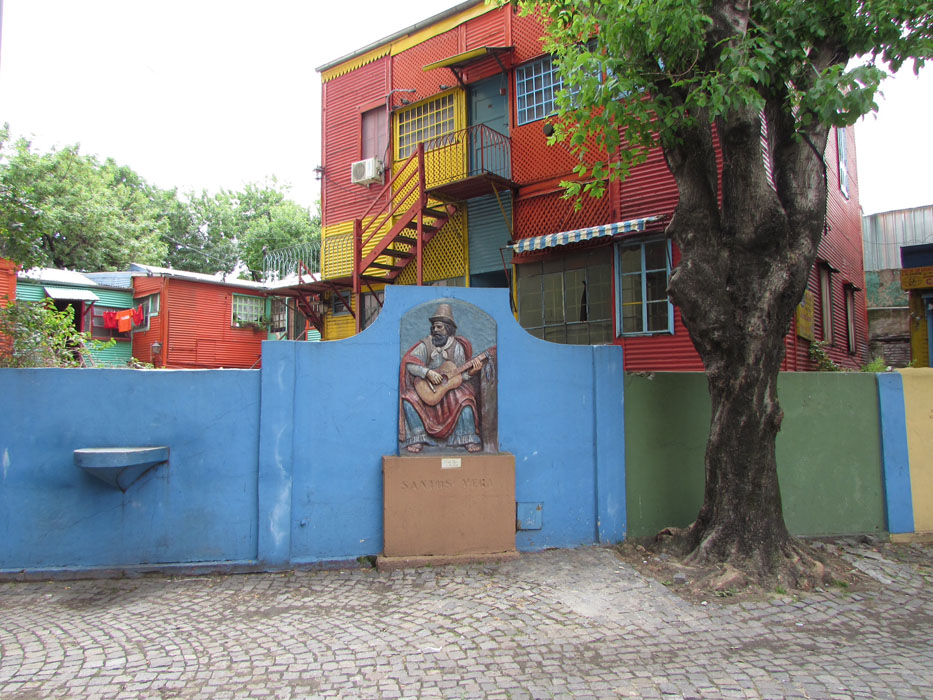 LaBoca is an overwhelmingly touristy, but strangely beautiful neighborhood.  The LaBoca neighborhood is home to the soccer stadium, which as you can imagine, many visitors were super hype about.

LaBoca is a lively and very colorful neighborhood.  Ironically enough, it’s a place where some Argentinians still call home.  Tango dancers abound and shops selling trinkets are sure to get your attention.  Caminito Street is the main strip and there are one or two other streets that are considered “safe” enough to roam around.  But the story behind the LaBoca neighborhood is is intriguing enough to overcome all of those things.

Initially, LaBoca was the home to the city’s wealthiest residents. However, an outbreak of Yellow Fever drove the wealthy elsewhere.  After leaving, many  of the wealthy rented out their old homes.  This area eventually became a haven for immigrants.

The area became a melting pot of sorts, which seems to account for the colorful “personality” of the neighborhood.

LaBoca is also where tango dancing originated.  As the story goes, LaBoca had several immigrants but the majority were men.  Many women in the area turned to prostitution.  Often a line would form while the men were waiting for the prostitute. While in line and joking around the men would play with knives and dance with other men imitating a knife fight. The women would see how they moved and possibly bump them up in the line.  The music often associated with tango is said to be derived from African and European influences.

LaBoca is further out than the other popular neighborhoods in Buenos Aires, but definitely worth the trip.  The area is unlike any you’ve ever seen.

My last day camping in Eilat was pretty low key. We spent the day at the beach and made the 5 hour drive back to Tel Aviv. Even

I woke up this morning and realized that I’ve been a day ahead for the last 2 days. Don’t quite know how that happened, but it dawned on